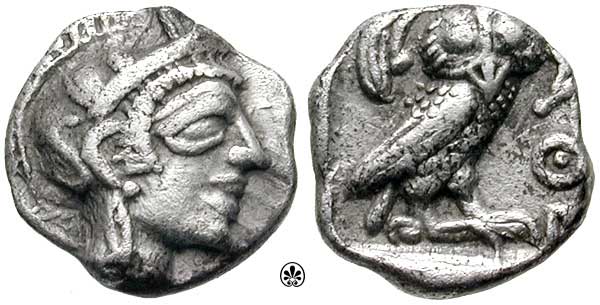 The Athenian Obol, Athen’s first standardized silver coin, depicts Athena on one side, and her symbol, the owl, on the other. -photo Wikipedia

The use of precious metal as a commodity currency in Western History dates to around the 5th century BC in ancient Greece. As Athens expanded its trade and commercial enterprises across the Mediterranean, it discovered an increasing need for a standardized system of weights and measurements. The Athenian government responded by establishing the Metronomoi, the first department of weights and measures. Athens also became the first city to mint standardized coinage by weight. It became the job of the Metronomoi, who were staffed by a rotating board of 10 Athenian Citizens (i.e. adult, male, nonslaves). The Metronomoi went out amongst the vendors of the marketplace and made sure that the products the vendors were selling adhered to the government-issued weights and standards.

The metronomoi also dealt with issues of currency, as the implementation of carefully weighed and standardized precious metal coins also gave rise to the new problem of coin debasement, or the removal of precious metal from a coin and recirculating it at face value. The problem persisted throughout the history of commodity coinage. Isaac Newton, after making his incredible discoveries in physics, and spending years in pursuit of alchemy, spent his later career as master of coinage in England. It was a period of rampant counterfeit and debasement, and Newton famously executed dozens of suspects while in office. To this day, the use of milled edges on coins as tamper-evident or anti-counterfeiting feature can be attributed to him.

for more info on gold, silver, coins and bullion, check out our gold buying page!