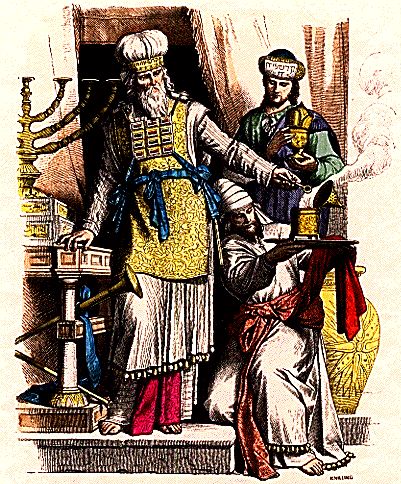 Ancient Hebrew Priest wearing the priestly breastplate adorned with the 12 stones of the zodiac/tribes of Isreal.

The tradition of associating precious gemstones with particular months of the year and associating them with one’s month of birth is a widespread phenomenon in both the Western world and elsewhere. The origin and meaning of the tradition however is hard to trace directly from history and myth, but could have its roots in very ancient practices.

The high priests of the ancient Hebrews wore a priestly breastplate, adorned with 12 different stones, representing simultaneously the 12 tribes of Isreal, the 12 months of the year, and the 12 signs of the Zodiac. In medieval times, Christian scholars adopted this to 12 apostles, and practice amongst the clergy was to keep a set of all 12 stones and wear one each month.

The association of these stones with one’s particular month of birth came somewhere in the next few hundred years, GIA places it in Germany in the 1560’s. Since then, the tradition has become slowly secularized, with both the stones and their meaning becoming more distanced from their original historical origins. Modern birthstones have more to do with taste, marketing, and the jewelry industry. The modern birthstones can be traced back to a poem of “unknown author” published in a Tiffany and Co. pamphlet in 1870.

for more info, check out our precious gemstones page!